At the 2007 June Annual Meeting of the PLIA it was decided that, even with informal member weed surveys, there was a need for a more organized approach to patrolling the lake for invasive weeds. At this point members Steve Soreff and Peggy Tucker stepped forward and volunteered to create a Weed Watch Program.  The Weed Watchers survey the lake’s entire shoreline, report any suspicious findings to either the New Hampshire Department of Environmental Services (NHDES) or a local aquatic plant expert, and if the item proves to be an exotic invasive weed, help plan an eradication effort.

Since 2007, volunteers comprising individuals who live or vacation on the lake, along with people who frequent the lake for recreation, have donated their time and effort as Weed Watchers on Pawtuckaway Lake. Trained by biologists to identify invasive aquatic plants both in and around the lake, this group has donated countless hours locating and planning the removal of infestations that threaten to disrupt the balance in biodiversity of plant life on this public water body.

Amy Smagula of the NH Department of Environmental Services created an excellent and comprehensive slideshow to train Weed Watchers. You can learn more about invasive aquatic species on Pawtuckaway Lake by viewing it yourself, here.

After that initial training, the lake’s shoreline is divided into sectors. Weed Watchers are assigned to each of these sections to patrol at least once a month during the growing season.  If an invasive plant infestation is identified, a plan of eradication is formed.

NOTE:  Only certified divers are qualified to remove invasive milfoil discovered and marked.  Improperly removed plants may spread milfoil throughout the lake.  Plant fragments can break off, root, and expand invasive milfoil infestations in the lake.  It may take several years to totally eradicate a persistent colony of any invasive plants, including phragmites or purple loosestrife. 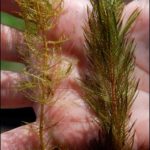 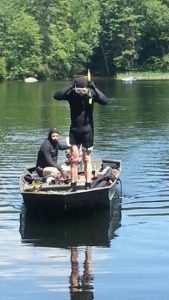 In late summer of 2015, it was the PLIA’s Weed Watchers who spotted the first growth of the invasive aquatic plant known as Variable Milfoil, in the lake near the boat ramp on Horse Island in the State Park.  The Lake Host Committee of the PLIA and NHDES were alerted to the problem, and mitigation action was immediately taken. Since then new infestations have been discovered around the lake. Now volunteers regularly search all sensitive areas as part of our Milfoil Team, marking new growths to be pulled and encouraging boaters to avoid infested waters.  Only certified divers are specially trained to remove any invasive milfoil in the lake. 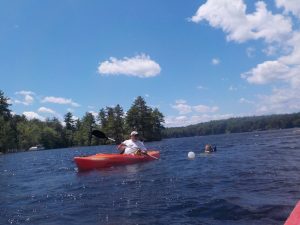 Weed Watchers can now be trained to support snorkelers and divers from the surface of the lake, to ensure their safety, assist them in their work, and warn other boaters about the activity in progress. Whether the infestation has been successfully eradicated, only time and the diligent efforts of Lake Hosts, Milfoil Team, and Weed Watchers will tell.

As our Co-Captain, Steve Soreff is fond of saying, “Anyone who kayaks, paddle boards, canoes, sails, fishes, or motorboats on Pawtuckaway Lake can be a Weed Watcher.  If you see something, do something!” If you are interested in joining these efforts or  learning more, please contact Co-Captain Steve Soreff at 603 568-3202 or soreffs42@gmail.com.